In Colab, you will get 12 hours of execution time but the session will be disconnected if you are idle for more than 60 minutes. It means that for every 12 hours Disk, RAM, CPU Cache and the Data that is on our allocated virtual machine will get erased.

Why aren’t resources guaranteed in Colab?

In order to be able to offer computational resources for free, Colab needs to maintain the flexibility to adjust usage limits and hardware availability on the fly. Resources available in Colab vary over time to accommodate fluctuations in demand, as well as to accommodate overall growth and other factors.

Some users want to be able to do more in Colab than the resource limits allow. We have heard from many users who want faster GPUs, longer running notebooks and more memory, as well as usage limits that are higher and don’t fluctuate as much. Introducing Colab Pro is the first step we are taking towards serving users who want to do more in Colab. Our long term goal is to continue providing a free version of Colab, while also growing in a sustainable fashion to meet the needs of our users. If you are interested in doing more in Colab than the resource limits of the free version of Colab allow, please try out Colab Pro and let us know what you think.

What are the usage limits of Colab?

Colab is able to provide free resources in part by having dynamic usage limits that sometimes fluctuate, and by not providing guaranteed or unlimited resources. This means that overall usage limits as well as idle timeout periods, maximum VM lifetime, GPU types available, and other factors vary over time. Colab does not publish these limits, in part because they can (and sometimes do) vary quickly.

GPUs and TPUs are sometimes prioritized for users who use Colab interactively rather than for long-running computations, or for users who have recently used less resources in Colab. As a result, users who use Colab for long-running computations, or users who have recently used more resources in Colab, are more likely to run into usage limits and have their access to GPUs and TPUs temporarily restricted. Users with high computational needs may be interested in using Colab’s UI with a local runtime running on their own hardware. Users interested in having higher and more stable usage limits may be interested in Colab Pro.

What types of GPUs are available in Colab?

The types of GPUs that are available in Colab vary over time. This is necessary for Colab to be able to provide access to these resources for free. The GPUs available in Colab often include Nvidia K80s, T4s, P4s and P100s. There is no way to choose what type of GPU you can connect to in Colab at any given time. Users who are interested in more reliable access to Colab’s fastest GPUs may be interested in Colab Pro.

Note that using Colab for cryptocurrency mining is disallowed entirely, and may result in your account being restricted for use with Colab altogether.

How long can notebooks run in Colab?

Notebooks run by connecting to virtual machines that have maximum lifetimes that can be as much as 12 hours. Notebooks will also disconnect from VMs when left idle for too long. Maximum VM lifetime and idle timeout behavior may vary over time, or based on your usage. This is necessary for Colab to be able to offer computational resources for free. Users interested in longer VM lifetimes and more lenient idle timeout behaviors that don’t vary as much over time may be interested in Colab Pro.

How much memory is available in Colab?

The amount of memory available in Colab virtual machines varies over time (but is stable for the lifetime of the VM). (Adjusting memory over time allows us to continue to offer Colab for free.) You may sometimes be automatically assigned a VM with extra memory when Colab detects that you are likely to need it. Users interested in having more memory available to them in Colab, and more reliably, may be interested in Colab Pro.

How can I get the most out of Colab?

Resources in Colab are prioritized for users who have recently used less resources, in order to prevent the monopolization of limited resources by a small number of users. To get the most out of Colab, consider closing your Colab tabs when you are done with your work, and avoid opting for a GPU when it is not needed for your work. This will make it less likely that you will run into usage limits in Colab. Users interested in going beyond the resource limits in the free version of Colab may be interested in Colab Pro.

I saw a message saying my GPU is not being utilized. What should I do?

Colab offers optional accelerated compute environments, including GPU and TPU. Executing code in a GPU or TPU runtime does not automatically mean that the GPU or TPU is being utilized. To avoid hitting your GPU usage limits, we recommend switching to a standard runtime if you are not utilizing the GPU. Choose Runtime > Change Runtime Type and set Hardware Accelerator to None.

For examples of how to utilize GPU and TPU runtimes in Colab, see the Tensorflow With GPU and TPUs In Colab example notebooks. 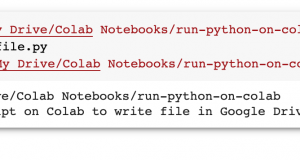 Saving and Loading Your Model to Resume Training in PyTorch